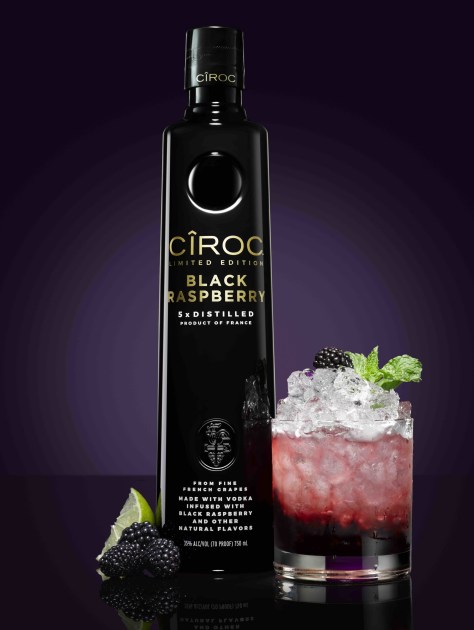 Sean “Diddy” Combs and the Makers of CÎROC Ultra-Premium Vodka unveil CÎROC Black Raspberry, the newest addition to the successful liquid portfolio. CÎROC Black Raspberry is a rich tasting spirit made with vodka five times distilled from fine French grapes, finished in a tailor – made copper pot still in Southern France.  The vodka is masterfully infused with a distinctive blend of Black Raspberry and other natural flavors.  CÎROC Black Raspberry finishes with a citrus zest flavor resulting in a smooth velvety finish.  The product is packaged in a sultry all black bottle with sleek metallic gold lettering, commemorating a winter midnight celebration. The liquid can be enjoyed on the rocks or mixed with a variety of fresh ingredients such as lime, mint, or chamoy. Kicking off the holiday season, CÎROC Black Raspberry will be available for a limited time only.

“CÎROC always looks to be innovative. One of the strengths of our business is introducing new flavors. Welcoming Black Raspberry into our portfolio made sense, as its one if my favorite fruits.  Packaged in a new, limited edition, sleek design, CÎROC Black Raspberry will be a drink everyone will want to enjoy and have on display in their bar this season,” said Sean “Diddy” Combs, Chairman of Combs Enterprises. “We continue to deliver the most successful flavors, and this will be no exception.”

Sean “Diddy” Combs and the Makers of CÎROC have created the following signature cocktails to introduce CÎROC Black Raspberry and get fans prepared for the season of giving:

Add all ingredients in a shaker. Add ice, shake it well. Double strain into a rocks glass and garnish.

Muddle the blackberries in the rocks glass, add crushed ice. Add the rest of the ingredients in a shaker with one ice cube only. Strain into the rocks glass and garnish.

Add all ingredients in a shaker except the champagne. Add ice, shake well. Strain into a flute glass and add the champagne and garnish.

Add all ingredients in a shaker except the beer. Add ice, shake well. Add the beer and strain into a highball glass rimmed with salt.

CÎROC Black Raspberry will be available in very limited quantities at liquor stores and top hotspots nationwide this Fall.

Every artist, composer and master craftsman has a secret project on the side, an endeavor pursued simply for creativity’s sake. For Hennessy Master Blender Yann Fillioux, it was “Master Blender’s Selection N°1”, which in contrast to the many celebrated Cognacs he has composed throughout his distinguished career, this latest blend is a very personal signature that was only ever meant to be produced in a single, limited batch.

In French, a project like Master Blender’s Selection N°1 is called a “coup de coeur” — literally, a heart-stopper, love at first sight or, as in this case, a passion project. It began in Maison Hennessy’s reserves, one of the largest, most extraordinary reserves of eaux-de-vie in the world.

As the guardian of Hennessy’s reserves for half a century, Yann Fillioux knows every eau-de-vie stored there. Master Blender’s Selection N°1 came to life during a blending session, a moment of unbridled creativity. Innovative, robust and completely devoid of artifice, it is a truly bespoke creation.

Creating Cognac requires patience and a constant dialogue between time, the elements, raw materials and skilled hands and minds. Little by little, each exchange gives rise to something precious that can only be realized through passion and a savoir-faire honed over 250 years of Cognac making.

With Master Blender’s Selection N°1, Yann Fillioux captures the essence of his art. This one-of-a-kind blend captures a particular moment in time and embodies his constant quest for excellence, extraordinary sensory memories and a perfect knowledge of Hennessy’s reserves.

Yann Fillioux and the Tasting Committee structured the Master Blender’s Selection N°1 by defining a first selection of eaux-de-vie. They then narrowed their selection down to 80 to 100 eaux-de-vie and grouped them according to their elegance, character and suppleness. The eaux-de-vie were then aged in both young and old French oak casks. When the time was right, the Cognac was bottled at 43°C – “cask strength” – in order to release its powerful aromatic tones as well as delicate, lingering spicy notes. Crafted as a single batch, it is a limited edition Cognac with a round and rich subtlety that has a bright amber color with a golden sheen. When it embraces both nose and palate, there is an unmistakable presence of lightly grilled, unshelled almonds and candied apricots with a faintly sweet flavor. It is recommended that it be tasted neat or with three bright ice cubes.

For the introduction of Master Blender’s Selection N°1, the Maison Hennessy wished to celebrate its time-honored ties with the United States, which became its very first export market over 200 years ago. This made-to-measure blend will therefore debut exclusively in the U.S. in October 2016 and will be available in two sizes – 375ml ($45) and 750ml ($80) 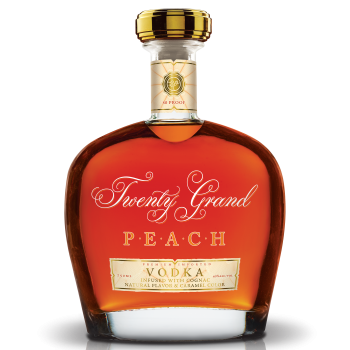 The brand, which launched in 2013, has released Twenty Grand Peach, which it describes as “an infusion of exquisite French vodka, superior VS Cognac and delectable, natural peach flavors”.

Twenty Grand Vodka is made from distilled from winter wheat, while Twenty Grand Cognac is produced from a selection of grapes from multiple crus of the delimited area of France, specifically the Grande Champagne Appellation.

Jon Holecz, vice president of marketing at Western Spirits Beverage Company, said: “Twenty Grand has been a remarkable success since the brand launched in 2013. We are very excited for the new peach flavor and new packaging design to hit the shelves nationwide.”

In addition to the new launch, Twenty Grand Vodka has also released a new bottle design for the entire brand collection.

Twenty Grand Peach is bottled at 40% abv and has an retail of US$29.99 for 750ml. It will be available across the US by the end of October.

The Redd’s family of brands is giving fans even more ways to break their routine with the nationwide debut of Redd’s Wicked Black Cherry.

Following rave reviews to the spring release of Redd’s Wicked Mango, Redd’s Wicked Black Cherry is a dark-golden beer with juicy black cherry flavors balanced by a crisp apple base. At eight percent alcohol by volume, the newest addition to the Redd’s Wicked family delivers a smooth, moderate body and light carbonation, with a refreshingly hard and satisfying finish.