Kahlúa®, the original rum and coffee liqueur, is heating things up this fall and holiday season with Kahlúa Chili Chocolate. This new, permanent addition to the Kahlúa portfolio delivers extraordinary flavor, spicing up everyday celebrations and social hang outs for the perfect twist on “the usual” and expected.

Kahlúa Chili Chocolate fuses the bold, fierce and unexpected, for a surprising and delightful flavor combination of hot chili and silky, smooth chocolate. The rich chocolate contrasts perfectly with the zest of chili pepper, allowing for an intense, exciting flavor.

“Kahlúa consumers are continually in search of the next exciting adventure and uniquely distinct experience,” said Troy Gorczyca, Brand Director, Kahlúa, Pernod Ricard USA. “Kahlúa is acknowledging that fiery spirit by offering an antidote to the everyday and kicking classic cocktail favorites up a notch. Kahlúa Chili Chocolate embodies the original Kahlúa taste consumer’s love, while turning up the heat.”

IN A SHOT: CAFÉ VOLCANO
1.5 parts Kahlúa Chili Chocolate
1 part Malibu black
Shake with a mint leaf over ice and strain into a chilled in a shot glass 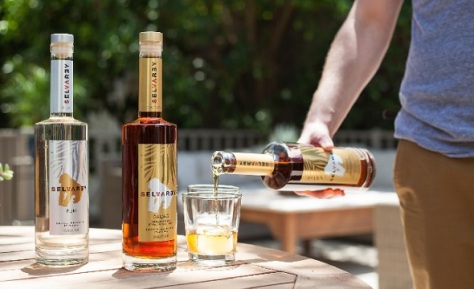 SelvaRey Rum (http://www.SelvaRey.com/), co-founded and co-owned by musician Bruno Mars, announced today the expansion of their award-winning Panamanian rums to the East Coast and Hawaii. In addition to California and Nevada, SelvaRey is now on shelves in New Jersey, New York, South Carolina, Georgia, Washington DC, Tennessee, Florida and Hawaii. Availability in Ontario, Canada is coming this fall.

The rums are already some of the most critically acclaimed in recent memory. SelvaRey’s aged white rum was a 2015 Double Gold Medal Winner and named best white rum by theFiftyBest.com. Their cacao rum – a five-year aged dark rum infused with natural chocolate – won the 2014 Chairman’s Trophy at the Ultimate Spirits Challenge in New York City and won the Gold Medal at the 2014 Miami RumFest. In addition, the rums were rated 94 and 95 respectively by The Tasting Panel Magazine, the highest ratings ever in their categories in the magazine’s history.

Brought together by a lifelong passion for rum, Bruno Mars teamed up with three rum aficionados to change people’s perception of what rum can be. After years of searching, they finally found legendary Master Blender Don Francisco “Pancho” Fernandez, former Minister of Rum, who’d carved out a distillery from the jungles of Panama. Together they created SelvaRey.

SelvaRey White (750ml / 40% ABV / $25.00) – SelvaRey White, a blend of three- and five- year-old rums, is aged in American Oak casks and carbon-filtered to remove most of the color without losing the deep flavors imparted during the aging process. Unlike many white rums, SelvaRey has been crafted with the distinct goal of being fine enough to sip on the rocks. Yet it makes a superlative Rum ‘n’ Coke, combines perfectly with fresh grapefruit juice in a “Reyhound,” or with ginger beer for a more elegant take on the Moscow Mule or “Light ‘n’ Stormy.” Most of all, SelvaRey White Rum serves as the base for an extraordinary Mojito.

SelvaRey Cacao (750ml / 35% ABV / $30.00) – SelvaRey Cacao Rum, the world’s premier chocolate spirit, boasts a rich five-year-old Panamanian rum whose inherent character is brought out by the infusion of natural chocolate. Flawless in creative variations of an Old Fashioned, it also serves as the base for a Chocolate Mojito or any upscale coffee cocktail. It can currently be seen on menus throughout the country in Mojitos, Mudslides, Cacao Pina Coladas, shots, and Espresso Martinis. Most notably and unlike many other flavored rums, SelvaRey Cacao Rum can be sipped neat or on the rocks.